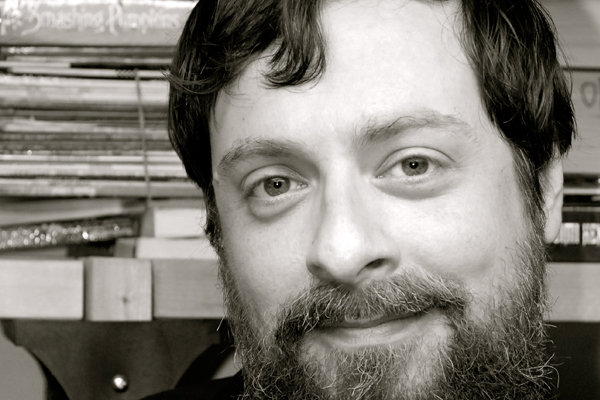 Michael James Pultz is one of the Council of Chiefs, the three gentlemen who are the co-founders and administrators of the Lottery League. First debuting five years ago in Cleveland and currently in its 3rd season here, the Lottery League is a wonderful project that drafts area musicians together into all new 4 piece bands governed by only one rule: none of the participants can be placed with current or past collaborators. As in the case of the Lottery League, whose members hail from diverse backgrounds and genres, Michael’s interests are varied and far reaching. Michael is the programmer and host of The Defend Cleveland Show, a locally acclaimed sports talk radio show on WRUW-FM 91.1. Now in its 5th year, The Defend Cleveland Show offers unique perspectives and commentary on the region’s sports and entertainment scene. Michael is also a musician who, prior to switching to sports talk, hosted the long running music program, Radio Dystopia, also on WRUW.  Using Radio Dystopia as a vehicle to bring musical acts from all over the world to Cleveland, Michael was able to promote and manage custom-curated events booked at such places as the Beachland Ballroom and Tavern, M.O.C.A., and the Rock & Roll Hall of Fame and Museum; which, in turn, enabled him to work for three years helping to book and manage stages as part of Cleveland’s annual arts and technology celebration, Ingenuity Festival.  Additionally, Michael worked in scientific research at Louis Stokes VA Medical Center for ten years, contributing to a number of papers as well as travelling to further the studies in the United States, Finland, and the Netherlands. In helping the Lottery League expand from Cleveland to a second Los Angeles edition in 2014 and beyond, Michael draws on all his interests and talents in presenting the Lottery League concept on behalf of the Council of Chiefs and Cleveland. Michael’s life, work, and passions, are rooted in this city, whose richness TEDxCLE also chooses to celebrate.